The multi-award-winning designer just became the first South African designer whose work now forms part of the permanent collection of one of the world’s most prominent design museums. 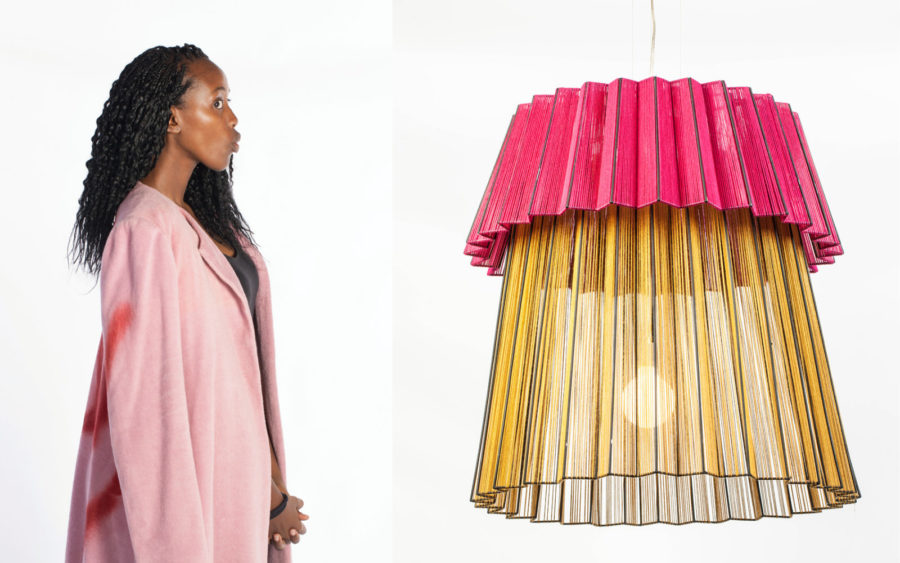 Located in a wing of the Palais de Louvre, the museum’s collection of design objects stretches as far back as the 16th century, including historical pieces as well as examples of the highest levels of contemporary craftsmanship.

“the work of Thabisa Mjo is remarkable on few levels: she mixes design and craftsmanship; she incorporates in her projects the concerns of our contemporary world with her roots and her traditions. Her personal and intimate vision for design, her social values all contribute to her avant-garde pieces. For all these reasons, the Art Deco Museum wished to acquire her pieces.”

The two pieces acquired by the museum are the designer’s  Mjojo Cabinet and the Tutu 2.0 pendant light, both of which a curator from the museum spotted in 2019, when they were exhibited at the Bonne Espérance Gallery, a Parisian gallery dedicated to Southern African art and design.

“I feel like I’m more of a storyteller than I am a designer. But I use design to tell that story,” Mjo told Clout in 2018. And indeed, the adherence to narratives, especially ones rooted in South Africa remain at the centre of her practice.

The black and yellow Mjojo cabinet is made of steel, and takes its shape inspiration from Jojo tanks, the ubiquitous water storage tanks mostly used in rural parts of South Africa as well as urban areas with water-shortage issues. The name of the cabinet is also a play on the isiXhosa word, mjojo, which can be loosely translated to mean shyness, or something that should be shied away from. “It’s so interesting to me to see other people being intrigued by this wacky cabinet, because for me, it was just this outlandish idea that I had, and really I wanted to satisfy my own curiosity to see if it could work,” says Mjo.

The Tutu 2.0 light, a design inspired by a skirt worn by xiTsonga women during the traditional Xibelani dance, is arguably the single piece that launched Mjo’s career back in 2016, when it won her the Nando’s Hot Young Designer Talent Search competition. “I always get a smile on my face when I think about Nando’s and all the incredible I’ve met at Nando’s…Because in all honesty, having that encounter and meeting those people has changed the entire trajectory of my life,” Mjo told Clout in 2018. The Tutu 2.0 light went on to be awarded ‘Most Beautiful Object in South Africa’ at Design Indaba 2018.

Parisians, and visitors to the city will get to see the pieces as part of the museum’s upcoming exhibition, which runs from the 19th of November 2020 until the 11th of May 2021, and titled Un Printemps Incertain, which translates to “an uncertain spring”, taken from Virginia Woolf’s 1937 novel, The Years, where she wrote, “It was an uncertain spring”.

The title of the exhibition also references the current uncertainty of the times we’re living through in a world rocked by the Covid-19 pandemic. The museum had this to say about the exhibition:

“The works exhibited here are steeped in personal history. They bear witness to a singular moment, crossed with caution, but which allowed some to take a step aside and take paths forgotten like unknown paths.”

As the winner of the Nando’s Hot Young Designer Talent Search in 2016, a regular furniture and lighting supplier to Nando’s, partner and collaborator with the Nando’s design programme, Mjo’s bona fide collectible Tutu 2.0 light can be spotted at various Nando’s restaurant around the world.

Join us for a webinar this Friday afternoon at 2pm

Got an idea for a bench design? Follow the link in

We're super excited to announce that the entry dea

The @nandos_hyd prototypes display as part of Righ

Four floors of contemporary SA design will be reve