As entries stream in for the 2022 Nando’s Hot Young Designer (HYD) talent search, South Africa’s leading young designer competition facilitated by Clout/SA, we continue to work and collaborate with many of the finalists from previous editions of the competition, who have become an integral part of our growing design community. When the Branson Centre, the Virgin Group’s social enterprise accelerator, were on the lookout for ways to share their passion for South African creativity as part of their corporate gifting, Clout/SA helped them by facilitating a one-of-a-kind collaboration with some of the previous Nando’s HYD finalists.

The project saw the finalist’s pattern designs interpreted onto a selection of Methode Cap Classique bottles of bubbles. The designers, which were from the 2018 leg of the competition, were Primrose Charmz and Zinhle Sithebe, alongside that year’s winner, Agrippa Mncedisi Hlophe, as well as pattern designer Glorinah Khutso Mabaso, a co-winner of another Clout/SA x Nando’s initiative, 2019’s Clout Industry Days. The patterns had initially caught the eyes of the judging panels at both Nando’s HYD and Clout Industry days not only because of their undeniable aesthetic appeal, but also because of the quintessentially South African stories they told, which drew on personal narratives as well as South African culture and heritage.

Zinhle’s design found inspiration in the popular Zulu tyre sandals, imbadada. She translated the sandal’s familiar black, white and red geometric shapes into a bold contemporary graphic pattern, giving it an unexpected twist with the addition of blue. Similarly, Mabaso looked to our heritage for her pattern, which celebrates the rhythm of the drum across different local cultures. For Primrose, the nature that surrounds us is a key part of her inspiration. Her design began as an interpretation of the shapes one might see inside a chilli when cut in half, and it has developed into a stunning and complex geometric pattern.

On the other hand, Agrippa created a new colourway and interpretation of the design that eventually earned him the top spot in the 2018 Nando’s HYD. The design took inspiration from his own personal journey. He wanted to create a flowing pattern that represents continuity, and as he explains it,

“a reminder that in life we all go through problems and rough patches, where we’re forced to take difficult curves, where we fall and rise again. But when we rise, we rise with more knowledge, [and with] stronger hearts and minds.”

As Clout/SA, we’d love to give a joyful shout out to our design community who are always on hand with original ideas, as well as the Branson Centre for their support of local creative entrepreneurs. We look forward to many more collaborations. Watch this space. 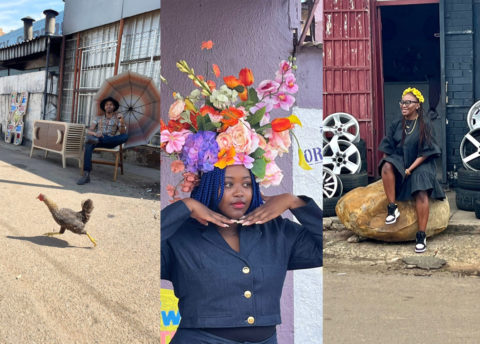