“There’s what we imagine, there’s what we understand, and there’s what we execute,” says Katlego Tshuma, the 2020 winner of the Nando’s Hot Young Designer talent search. His Sangu Bench concept which won him the top spot was inspired by the ubiquity of the grass mat among several traditional African cultures, where it is used to sit, sleep, and even as a screen.

“There’s what we imagine, there’s what we understand, and there’s what we execute,” says Katlego Tshuma, the 2020 winner of the Nando’s Hot Young Designer talent search. His Sangu Bench concept which won him the top spot was inspired by the ubiquity of the grass mat among several traditional African cultures, where it is used to sit, sleep, and even as a screen. “I realised that I’d have to take grass mats into 2020, in a contemporary way. So I was like…how do I take this concept of grass and put it into a bench, and that is what the Sangu Bench is about,” he explains.

Since winning the competition, he has expanded on the initial Sangu concept to design several pieces that make up the collection.

Says Tshuma: “The Nando’s Hot Young Designer talent search is a design competition, it’s not necessarily a manufacturing competition, so for me what was important was to develop an idea that could be executed in various ways, while maintaining the integrity of the overall concept.”

Through a collaboration initiated by CLOUT/SA’s creative director, Tracy Lee Lynch, the first of the pieces from Tshuma’s Sangu collection has been brought to life, by drawing on the manufacturing expertise of Adriaan Hugo, the designer and co-founder of the award-winning design studio, Dokter and Misses. More than a straightforward manufacturing collaboration, the process has also been a learning curve for Tshuma, whose background is in the advertising industry, with absolutely no furniture manufacturing experience.

“There’s a difference between rendering a design and actually manufacturing it. This process has taught me a lot. One of the main lessons being that it’s nice to have great design, but it’s useless if you can’t manufacture it,” says Tshuma, explaining that initially, when he submitted his drawings to Hugo, he couldn’t work with them. 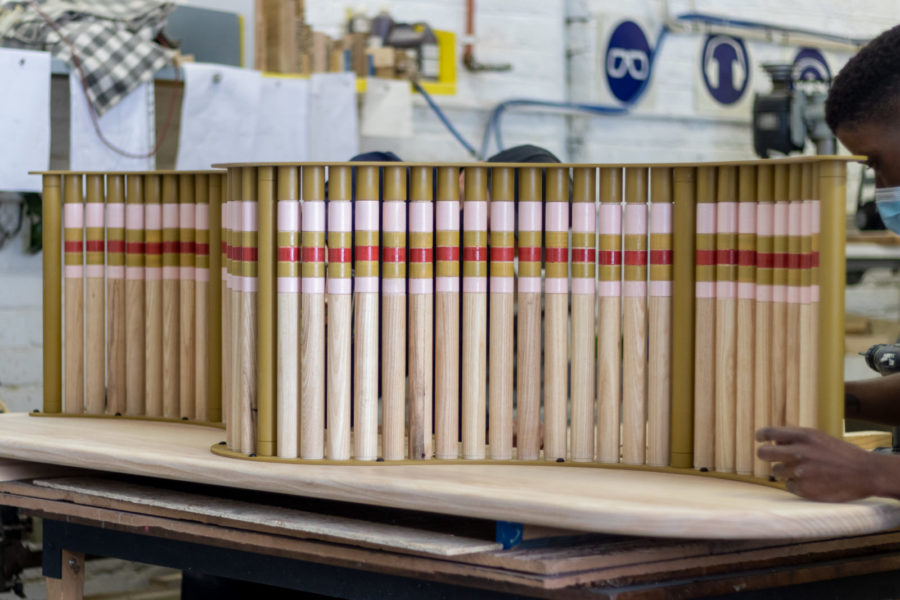 “There was a divide between the rendered design and what it could be. That gap had to be bridged; some development had to happen to make the design manufacturable. So I thought it might be good to actually get Katlego involved in the manufacturing in the actual factory,” explains Hugo. Over a few weeks, the pair reworked some elements of the design, which is made up of some 43 pieces, resulting in the Sangu Bench.

“The process really got me thinking about how we can design better, how do I make sure that going forward I submit designs that a manufacturer can work with. Working with Adriaan has been beautiful because he has been able to show me like…’this is how this gets done’ and how it all comes together. Even with my design process now, every decision goes hand in hand with an understanding of the potential costs,” explains Katlego.

For Hugo, who has worked on numerous collaborations, this was his first collaboration with a first-time furniture designer. “Each collaboration is different. And it works when both parties bring their best, when they are invested in the project and want to see it succeed. This worked very well because there’s that idea that everyone brought something to the table,” says Hugo. 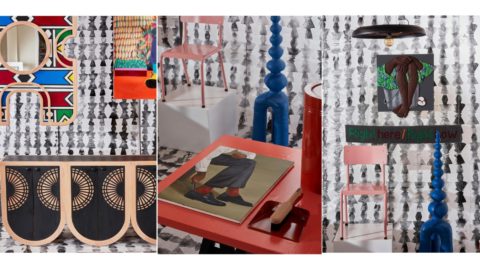 There is no turning back now! 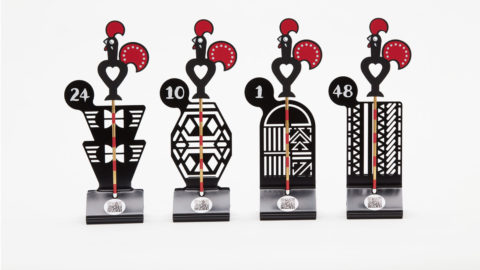 Design dynamite! Even in the smallest packages

A shout out and heartfelt thank you to all the des

We're super excited to be taking the "Right Here R

VOTE NOW!!! Not one, not two, but three South Afri

7 out of 10 @nandos_hyd designers feature in the R

CAST YOUR VOTE! we are thrilled that there are 3 S